Generating Realistic Populations of Megacities and their Social Networks

In my last blog I wrote how the study of disasters needs to account for three interacting complex adaptive systems, the physical environment, the social environment and the individual cognitive environment. Agent-based experimental simulations of populations responding to disasters need  their synthetic populations to represent not just the individual characteristics of people, but also the social connections that influence their behavior. Tomorrow I will present a paper on how to generate such a population at the Computational Social Science Society of the Americas in Santa Fe, New Mexico.

The paper, co-authored with my fellow researchers at George Mason University, discusses how a mixed method of iterative proportional fitting and network generation to build a synthesized subset population of the New York megacity and region. Our approach demonstrates that a robust population and social network relevant to specific human behavior can be synthesized for agent-based models.

Or view the presentation:
Generating Megacity Populations and their Social Networks 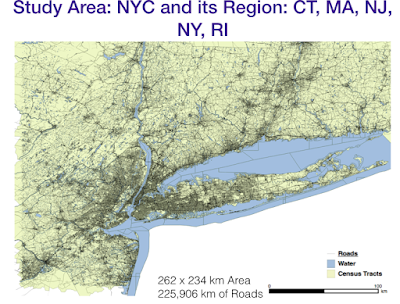 The New York Megacity and region includes very dense areas and rural ones. 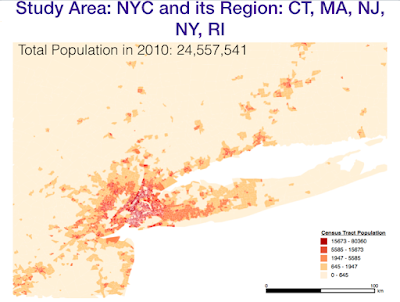 We are creating a 1:1 population based on the US 2010 Census, and we use Iterative Proportional Fitting (IPF) for the population synthesis. This is a method in which the attributes of an individual unit are taken from a data set with fixed marginal totals. For each agent in the model a random sample is taken from a probability distribution of the relevant attributes existing in the population data. This process is repeated until all the attributes are assigned to the agent population. 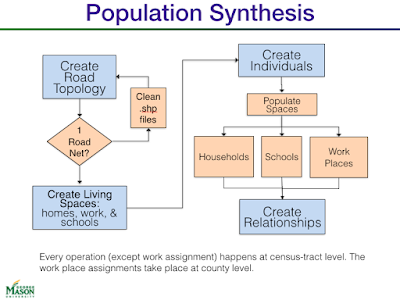 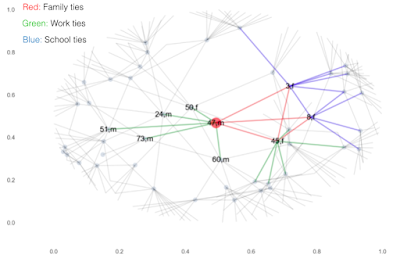 My colleague, Talha Oz, has shared the code on Jupyter's nbviewer:
Synthesis Code

Posted by Annetta Burger at 8:16 AM